Let’s begin with last night when the children received their new sweaters (31) for the coming winter and paraded them around the front courtyard for us.

Today we dressed in the clothes our hosts had kindly had tailor made for us – “We want to honor you according to our custom,” they said.

And the ladies wore their new saris for the conference – so it was quite an occasion. 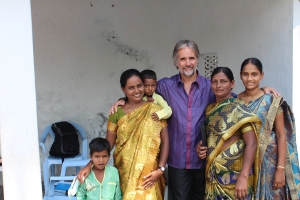 Then we had surprise visitors from the village where we conducted the Crusade. They all came in to say ‘hello’, including the man I’d prayed for about eyesight – which he insisted was better than before. They were on their way to the conference and will probably be the core of a new house church in that village. That’s why another motorcycle is needed to enable the team to travel to these villages regularly – they normally don’t have use of the car that’s been hired while we’ve been here. 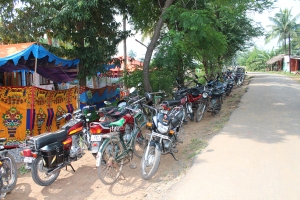 Later we arrived at the church to find the numbers had increased to over two hundred and the music well under way.. 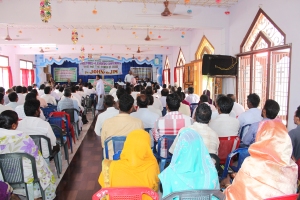 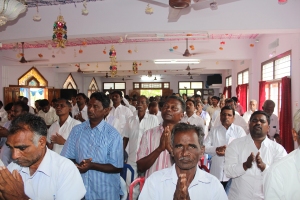 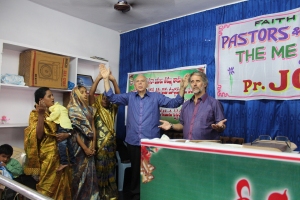 Jim shared his testimony again. People have really responded to his gentle manner and his honesty about his walk. He has been a great hit with the children and I think if he had his way he would be taking them all home with him.

I spoke about the Kingdom of God and our identity and inheritance as sons and daughters of a living God. Treasure in jars of clay with amazing power and authority to release the presence of Jesus on earth as in heaven. 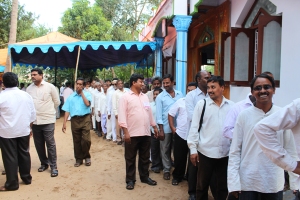 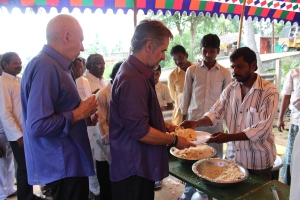 After lunch we considered the power and gift of God’s Spirit that enables us to do more that we could ask or imagine…. heal the sick for instance. I called a some men up and demonstrated healing prayer and then had a few lay hands on the four of five who said they needed healing. This all seems very new to them. I asked the pastors to talk to one another and they smiled and kept looking at me. They are not comfortable sharing personally and no doubt with modelling, mentoring and encouragement could break through what may be a lack of confidence.

The conference ended with the conference thanking us in Indian style with crowns, garlands and a garment around our shoulders.

We presented the gifts of material for shirt and trousers to some of the pastors and then were on our way.

I find it very difficult to know how much has actually been received as the language and cultural barrier is the most challenging I’ve ever encountered. We’re assured that people enjoyed the talks and were very appreciative but from my perspective it was challenging not being able to build much of a relaxed rapport. However Rau did an amazing job as an interpreter and was very committed to conveying accurately and passionately the message being delivered.

Other reflections will come later, it’s been an amazing two weeks with lots packed in and much to learn from. God’s been very present and the one regret we all have is that the third night of the Crusade had to be cancelled. That was promising to be a great event with increased numbers and I’m sure some wonderful healings.

Just as I was finishing this update I was summoned to do a baptism of a woman who has become a new Christian. It’s the first time I’ve shared in a baptism in a river in the dark…. at least there were no crocodiles… but we praise God for moving in her life and we pray that she will grow in faith. It was a great time!

We came to see whether this work and the people involved are legitimate and authentic. I’m impressed with what I’ve found here, the level of commitment, the integrity, and the extent of the need is profound. I wouldn’t be surprised to be doing the same again this time next year with a slightly larger team. So if you’re interested….. start planning.

Tomorrow we fly out at midday. Jim straight home to Canada while I jump off the plane in London to visit Michelle my daughter and other friends for a few days. We leave behind a whole bunch of people we have grown to appreciate and love in these twelve days together. We pray that our journey will continue together and we can form part of a team that makes a difference in this part of the world. When asked about the overwhelming problems in Calcutta and how what she did mattered, Mother Theresa looked at the dying infant in her hands and said, ‘It makes a difference to this little one who will die with dignity – knowing love in the short time she’s been with us.” If that was good enough for her it certainly works for me as well.

Thanks again to many of you who have contributed to making this trip possible. Be assured there’s more to come……