I met Brad and Jan, and Ken in the foyer of the Radisson Hotel not far from the airport. They left Vancouver Island on the milk run; as they described it and flew via Vancouver, Calgary, and Heathrow to India. Their flight was delayed 3 hours which left them crawling into the hotel at 7am to enjoy the ‘free’ breakfast which had cost them a lost night at the hotel. I arrived at 10:30 travelling via Vancouver and Heathrow with a six hour wait in London. It’s a long journey that takes us into the future and we’re now about 11 hours ahead of you on the West Coast.

We arranged for an afternoon tour of Delhi which proved to be a great overview of the city with a deep experience of the density of traffic and constant traffic jams. Smog lies over the city giving a yellow hued light to the sky and I only remembered later that last year we had undertaken a similar tour on a public holiday – which was why the traffic seemed easier then.

We visited the Qutab Minar,  (I quote)…the tallest brick minaret in the world It is an incredible example of early Indo–Islamic architecture. It was built in 1206, but the reason remains a mystery. Some believe that it was made to signify victory and the beginning of Muslim rule in India, while others say it was used to call the faithful to prayer. The tower has five distinct stories, and is covered with intricate carvings and verses from the holy Quran. There are also a number of other historic monuments on the site. 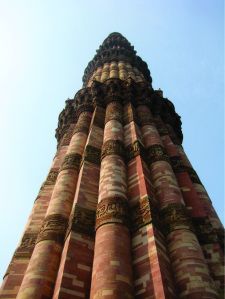 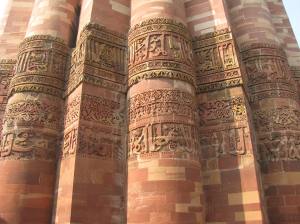 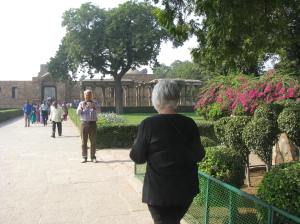 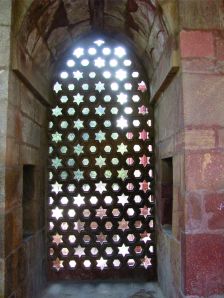 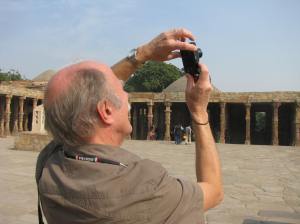 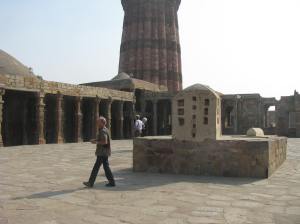 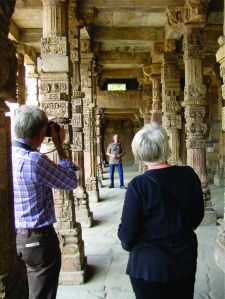 The intricacy of the carvings and size of the minaret is impressive.

Next stop was one of the oldest mosques built from red stone transported by elephant and horses from Rajistan. The Jamali Kamali mosque, positioned in an enclosed garden area, built first during the years 1528-29, has a southern entry. It is built in red sandstone with marble embellishments. It is claimed to be a forerunner in the design of Mughal mosque architecture in India. The prayer hall, fronted by a large courtyard, has five arches with the central arch only having a dome. At all these sites shoes have to be removed and no photographs allowed…. I always find it sad at the amount of activity and effort, the sincerity of many, but the emptiness of the eventual spiritual encounter…. Prayer mats and blank walls…. 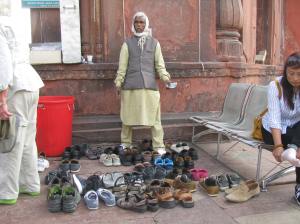 Then it was off to Old Delhi which is a rabbit warren of streets and vendors through which we were bumped behind a hard pedaling rickshaw driver. Apparently much of the business here is related to marriages and the traditions of gift giving that is an enormous burden on the shoulders of parents of the bride. 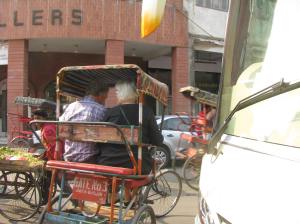 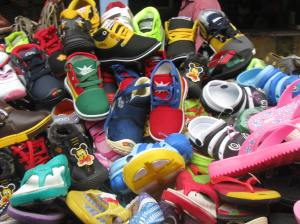 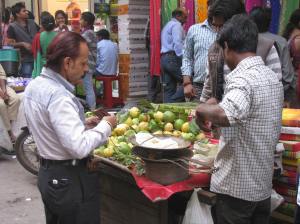 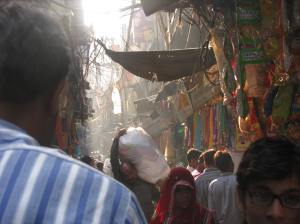 This photo below is of a man having wax removed from his ears…. anything you can imagine is a business opportunity… Ken was recounting when he had the procedure done here 40 yrs ago…. “he produced a big ball of wax, probably a slight of hand…. way bigger than what would fit in my ear… but it seemed to help :-)”. 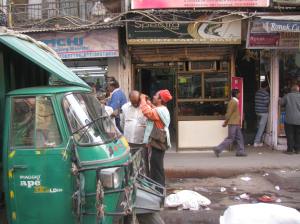 Later we spent 30 minutes at the last home of Gandhi where he lived until assassinated in 1948 on his way to prayer in the gardens of the home (that of a generous friend). A visit to Gandhi Smriti will show you the exact spot where Mahatma Gandhi, affectionately referred to as the Father of the Nation, was assassinated on January 30, 1948. He lived in the house for 144 days up until the time of his death. The room that he slept in, kept exactly how he left it, and the prayer ground where he held a mass congregation every evening are both open to the public. Plenty of photos, sculptures, paintings, and inscriptions are also on display. 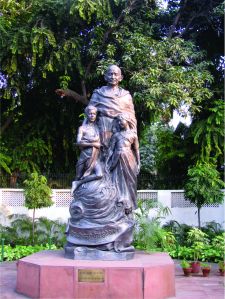 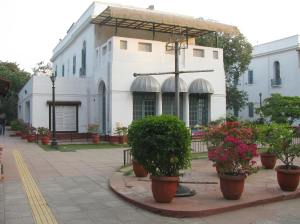 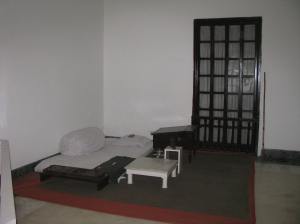 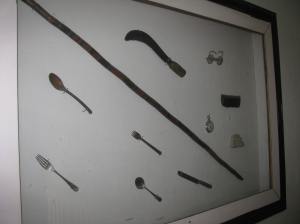 Today. Friday, we fly south to Vijayawada where we’ll be met by Raj and family and head to the orphanage in Kotipalli.